My 2017 Fox 34 Factory was installed on my Yeti in October, 2016.  I’ve biked about 3+ months since then and have not crashed.  Really amazing for me.  I’m really good at going over the handlebars and not getting hurt.  I’m going to lose that skill.

I’m riding much more technical than previously, as is my wife who now has the same fork.  Starting to do crazy shit like about half of the drop-in to Horsethief Bench near Fruita, CO and part of Flying Monkey in Virgin, UT.  I’ve become fearless…

I will never ride a Rock Shox again.  If a demo bike has a Pike I’m waling away.

I have a new theory.  When riders say you have to have the technical skills to ride Rock Shox, it really means they figured out hacks for the poor design.  Of course they are proud of their hacks, err, skills, they earned them.  For the rest of us there is Fox.

I’m still riding, and loving, my 2014 Yeti SB95c.  However, over the years I’ve rode a bunch of demo bikes with different component setups and slowly figured out what works best for an intermediate who rides rocks carefully and doesn’t want a trip to an emergency room.

This post is useful for any trail category bike with a beginner or intermediate rider.  Advanced riders on all mountain bikes have plenty of resources online.  These upgrades had a major positive effect on my riding!  I have a whole new bike!

I’ll never be a strong 24 year old stud again with legs like pistons.  When I was a ski bum for 3 years after high school, 100 days a year on skis, and then 2 years as a power company lineman climbing poles and towers my legs were damn strong.  No MTB back then however.

I rode this fork for two weeks in Moab and Fruita in late October, 2016 and never crashed!  For me that is amazing.  I didn’t ride much during our very wet Northern California winter but I returned to Hurricane / St. George, Utah, Fruita, and Moab for three weeks in March and April, 2017 and started riding gnar I previously hiked the bike on.  Again, no crashes!  This fork gently lifts me over everything I’ve hit, even a very low speeds such as 6 mph.

For 2017 Fox re-engineered their slow speed bump performance, probably the first fork manufacturer to specifically target intermediate riders with a performance fork.   It made a huge difference in the low speed gnar performance over Rockshox, and probably the others.  Before this the manufacturers were focused on racing and we got the leftovers.  Now we have a product designed for us but it also performs for advanced riders.  Fox has tweaked the low speed bump performance a bit more for 2018 but I haven’t rode one of those yet.

The bike performance is so good that I’m starting to ride very famous gnar such as the infamous Drop-in to Horsethief Bench near Fruita and Flying Monkey in Virgin, UT – and still not crashing!

My riding skills aren’t better – my equipment is.

So I just put the new fox fork on my wife’s SB95c and she is starting to ride stuff she used to walk.  My strong feeling is: Screw Rockshox.  I won’t ride them anymore, and that includes the Pike which sent me over the handlebars on not very big rocks.  They aren’t designed for us slower intermediates.  I had two Rockshox reps, several mechanics, and eventually me adjust the shit out of my Rockshox Revelation.  No adjusting made up for antiquated engineering.

I’m going to restate:  This blog is for intermediates.  I have no opinion for advanced and expert riders.  I can’t and don’t test for their riding styles.  If they think Rockshoxs are great then fine, they were designed for them anyway.

I asked the Fox factory reps at the Trailhead Dirt Days demo event in 2016 if I should upgrade my Yeti to the new and exciting Fox X2 rear shock.  They recommended the simple Aircan upgrade which costs about $100.  So I upgraded my shock and noticed a softer more plush ride through rock gardens.  The result is a little safety and more control and comfort.  Not a big deal by itself but when combined with my other upgrades it helped to improve my bike’s performance in a major way.

My new Shimano gearing has a 28T (tooth) in front and a 40T as the largest in the back.  This gives me the same low gear as my old standard 2 x 10 setup.  I’m not a strong climber and the standard 1 x 11’s on demo bikes don’t have that low gear.  That is why I didn’t change over years ago.  This upgrade cost me about $600 but I could keep my XT crank because it was originally for 3 gears up front, although I was running 2 from the beginning.  The middle placement worked for the 1 x 11.  Hey, I got a good deal on it when building up the bike!  Shifter and derailleur are new Shimano XT’s.  They have to also be replaced.

For your reference the above shows all the gears in the cassette and how many teeth they have.  The 37T and 40T are the most important for me.  I need low gears for climbing and these nail both the long grinds and the technical rocky climbs.  Earlier setups didn’t do both well.

After I tested my setup and it worked fantastic in Moab, Hurricane, and Fruita, our favorite rocky trails, I recently setup my wife’s SB95c similar but not the same components.  Not cheap but worth it!  The only changes are that she has a beautiful black Box 46T cassette, a pretty gold 30T oval chainring, and a new crank.  Oval is supposed to help on the climbs. Shifting and derailleur are new Shimano XT’s.  She hasn’t rode it enough yet to have opinions on the gearing.  Total cost for this plus the Aircan was $900 installed.  The Fox Factory 34 140mm fork is $879 retail and hard to find cheaper.  She has noticed a huge improvement with the fork on the gnarly Styles Ranch Trail in south San Jose.  She’s had the fork a few weeks longer than the gears.

I don’t know the manufacturer of the chainring, it is not on it or the invoice.  She has a Raceface crank but I don’t think it is important for intermediates who makes this stuff as long as they are reputable manufacturers.  Whatever you bike shop supplies should be fine.

The 30T gold oval chainring required a bigger 46T cassette to achieve the same low gearing as my setup.  Gearing gets technical so I rely on my mechanic, Scott at Trailhead Cyclery in San Jose, and the software he uses to figure this out.

So now our bikes ride like the new ones or even better for us.  We see no need to upgrade our trail bikes.  However, yesterday we demoed the Yeti ASRc, a lightweight cross country bike that can handle some gnarly tread, and the Specialized Turbo Levo FSR pedal assist bike with 3 inch tires.  Both would be terrific second bikes for us but my wife fell in love with the Levo 🙂

Meanwhile, we’ll be riding the Santa Cruz Mountains, Henry Coe State Park, and the Sierras this summer.  Back to Utah and Colorado this fall.  See you on the trails! 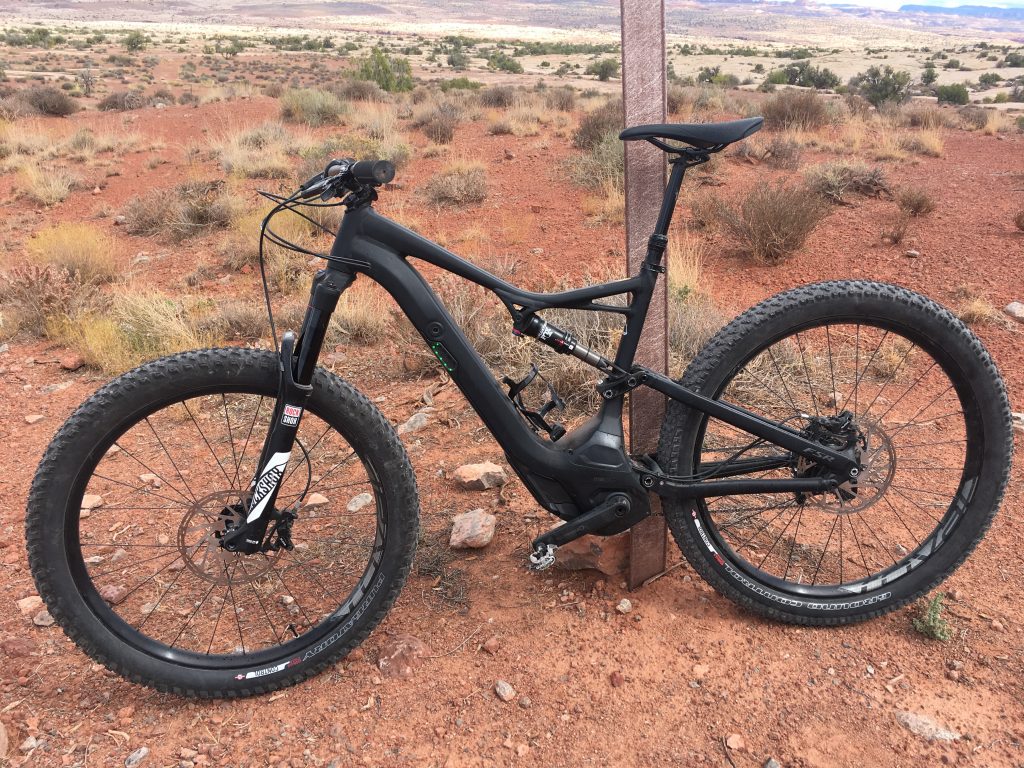 I know, evil.  Nothing could be worse for MTB than an e-bike, even a very low powered one.  Well, that isn’t my opinion, especially after riding a couple.

END_OF_DOCUMENT_TOKEN_TO_BE_REPLACED

I’ve rode a Rockshox Revelation RCT3 140mm fork for the past two and a half years since my Yeti was new.  Nice, but I’ve been over the handlebars or crashed more than a few times on what I consider small rocks, maybe 6 – 10 inches high.   After two nasty crashes recently, one that had me limping around Fruita, CO for a few days and unable to ride,  I had enough.

Fox redesigned their 34 line in 2016 and I was noticing the smoother and more controlled rides over gnar at the Outerbike and Hurricane mountain bike festivals.  After the Fruita incident on the Holy Cross Trail, which I blogged about recently, I was headed to the fall 2016 Outerbike in Moab.

END_OF_DOCUMENT_TOKEN_TO_BE_REPLACED

I’ve had my wings clipped at bit.  I drove 1,066 miles to crash on my first ride and damaged the climbing muscles in my left thigh.  The Holy Cross Trail is double black diamond so not the best warmup trail.  Me bad.

END_OF_DOCUMENT_TOKEN_TO_BE_REPLACED 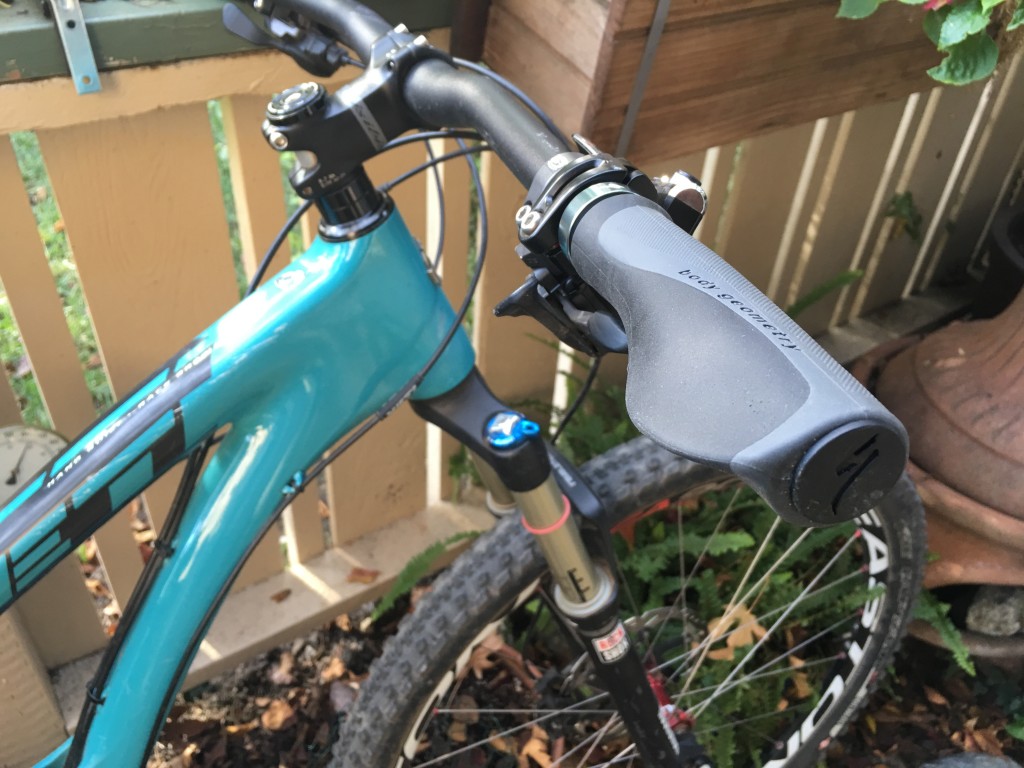 Our grips were looking pretty sad so we stopped by Trailhead Cycles in west San Jose to replace them.  Lars, the owner, pointed us toward the Specialized Contour grips among others.

END_OF_DOCUMENT_TOKEN_TO_BE_REPLACED 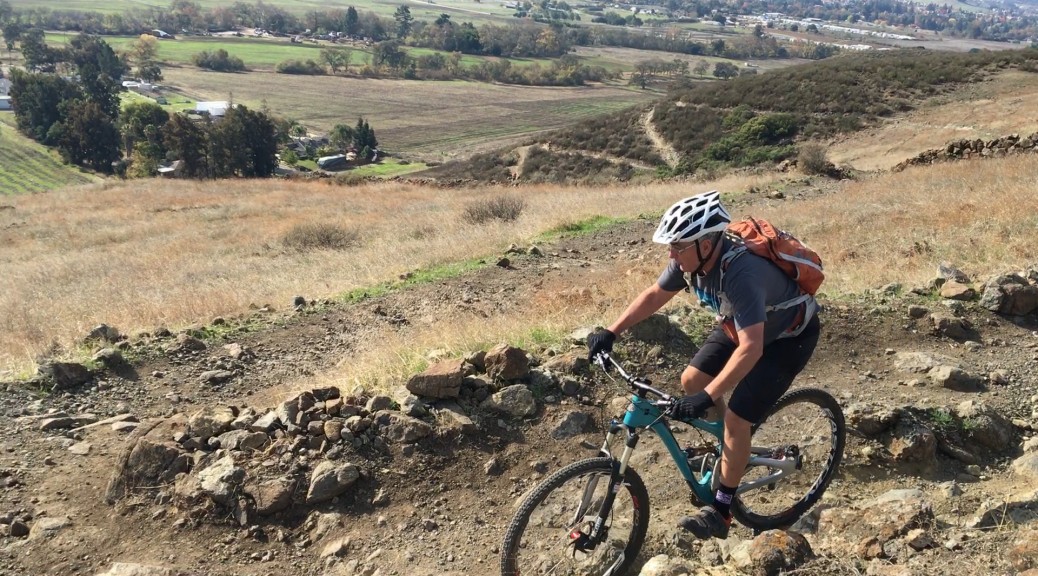 We spent 2 1/2 years researching and riding demo bikes after we attended the 2013 Fruita Fat Tire Festival in Colorado. We had no idea what a bike festival was about but soon discovered that we were riding waaaay better bikes than our decade old Cannondale cross-country (XC) bikes. We were able to ride farther and at a higher skill level than we ever imagined. But why?

This video shares my research and experience with trail mountain bikes, a category of bike between cross-country and all mountain. I hope it saves you a lot of time and expense. I get into some details but try to focus only on what really matters for intermediates.

See my blog at http://jimpreston.bike for information on specific bikes and my trail analysis for intermediates videos. You can also subscribe to this channel to be notified of uploaded videos – and there are a bunch more to come for Lake Tahoe, Moab, Zion-St. George, UT and Fruita – Grand Junction, CO.

Mountain Biking Road Trips In The US West