Hi, I’m Jim Preston.  I’m an older intermediate mountain biker.  I started riding bikes in the Santa Cruz mountains as a kid in the late 1950’s.  I bought my first mountain bike, a Diamondback with no suspension but 21 gears in 1989 in Anchorage, Alaska.  In Alaska I did a five day fly-in trip alone to explore some remote wilderness on my bike in the Wrangle St. Elias National Park area. 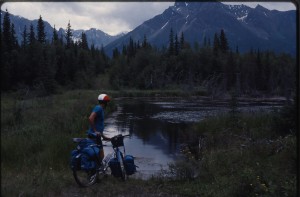 I rode this bike in Russia a bit but leaving my Jeep at a trailhead in Russia was too risky.  Later I rode it in Washington state but not many cool trails then.  Mostly Forest Service roads which bore me.  I introduced my wife Katya to MTB in the Cascade Mountains but she tried to throw the old REI bike off a cliff.  I retreated on that idea for a few years.

Back in my native California I bought a Cannondale hardtail with a head shock in 2002.  This was my first time with “suspension”.  I had no idea it was the wrong bike for the trails I wanted to ride, like the Downieville Downhill and Moab.  The bike shop guys figured I should have an XC bike.  I had no clue about bikes other than price. 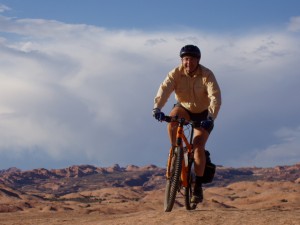 I was not an MTB enthusiast and hadn’t tried to acquire bike skills beyond the basics.  I walked almost everything technical.  My time was fully occupied with other more important issues, as is typical for intermediates.

In early 2004 I finally got Katya on a mountain bike.  We splurged for a full suspension Cannondale Jekyll for around $1,500 as I recall.  In a month I had her riding the amazing Thunder Mountain Trail near Bryce Canyon National Park in Utah.  Great place to teach a chick MTB.  15 miles and we hit 8,300 feet elevation.  She survived.  I also taught her on Moab’s Slick Rock Bike Trail because other than ripped up Jeep and dirt bike trails there wasn’t much else in Moab then. 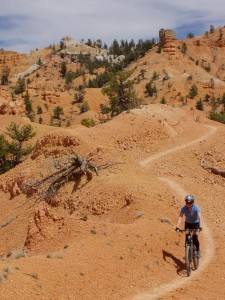 After this our riding picked up and we were biking in Sedona for a couple of years and then focused on Moab every year for a couple of weeks.  We were also riding the nearby Santa Cruz Mountains, Downieville in the Sierras, and odd places like Blue Diamond west of Las Vegas.  Our road trips were becoming more MTB focused and less sight-seeing.

I rode her bike in Henry Coe State Park one day in 2005 and realized that I needed a full suspension bike.  I soon bought a Cannondale Rush with the cool lefty fork, another XC bike.  I still had no clue that I needed a bigger travel bike than 110 mm.  I didn’t understand what an XC bike was about and knew nothing of bigger travel bikes.  Did trail and all mountain bikes exist then?  I still don’t know.  However, I was in bike shops across the West getting repairs done and buying stuff and no one mentioned that I had the wrong bike for the trails I loved to ride.

On our XC bikes Katya and I would hit rocks and the bike would stop.  We had no idea some other result was possible.  Skills picked up a bit at a group lesson given by a former racer and that gave Katya the courage and some skill to ride Downieville the next day.

Why Cannondale?  It was the only high end bike brand that I had heard of.  Other than Diamondback I knew nothing of the other brands. 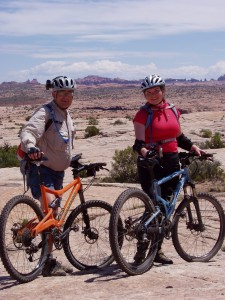 In 2011 for my birthday I bought a Contour helmet camera and started shooting the Moab trails.  During editing I explained the trails with a voice-over because the original sound track was awful.  After a few years my Trail Analysis For Intermediates videos attracted 10’s of thousands of views on YouTube.

In April 2013 we drove to the Fruita Fat Tire Festival in Colorado.  I had heard about it a few times and was curious what a fat tire festival was about.  Within a few minutes of riding some premium 140 mm fork trail bikes we realized that our old bikes were crap for the terrain we were riding.  We were able to bike better, safer, with more control, explore more trails, and bike farther.  We were having much more fun.  We started to get enthusiastic about mountain bikes!

The problem was I still knew very little about bikes and if we were going to buy the cool bikes we demoed at the festivals and spend upward of $10,000 for two bikes I needed to figure out what all the technical details were about.  How were we going to decide between various models of Yeti, Pivot, Niner, Santa Cruz, Ibis and others that we rode at bike festivals?

The MTB industry makes that very difficult for a time constrained intermediate.  The number of options with bike geometry and components is rather large, and often controversial.  (Get into the food-fight about wheel size, for example.)  I pushed aside my business projects and dug into the details, trying to sort out what really matters for intermediates vs. the cool kids who bomb down through the gnar at speeds we will never reach.  By the end of 2014 I kind of knew about mountain bikes for intermediates.

In December 2014 Yeti sent us an email with a price we couldn’t refuse on one of their SB95c 29er demo trail bikes and within a couple of minutes a medium frame with XT level components for Katya was in my shopping cart on their site.  The SB95 carbon was out of production by then and I was having a very difficult time finding a large for me.  The SB95c was on our short list with a few others but we felt it gave the best ride in the rocks and that was what we wanted.  Finally a frame showed up on eBay at a bike shop in San Francisco and I swooped in on it.  Lars at Trail Head Cyclery in San Jose helped me build it up with mostly XT level components.

In March 2015 I drove from San Jose to the Zion and St. George area of Utah, the nearest Utah rocks.  Wow!  I had a blast riding better than ever before.  Katya took lessons from Dave Robinson of The Ride Guides in Santa Cruz and her skills and confidence on her new bike went way up.  By summer we were both dropping down through boulders at Lake Tahoe that we never would have rode before.

So why this blog?

In October 2015 I was on a month long MTB road trip to Fruita, Moab for Outerbike, Virgin for Rampage, and then back to Moab.  I was in a LOT of bike discussions with intermediate riders and they wanted to know about bikes and components that I had researched over the past few years.  There was also a lot of interest in my analysis of trails for intermediates.  The wild staff at JensonUSA.com noticed my videos and told me to get my act together.  So I setup my intermediate MTB YouTube channel and this site while in an RV park cabin in Moab during a lightning storm.

Also, I have noticed that bike companies and the staff at bike shops are all about racing.  Intermediate riders have very different interests and those are not being addressed well by the industry.  A lot of intermediate riders are not on the best bikes for the trails they were riding – the same experience we had and I resent not getting the most fun out of over a decade of riding when better bikes were available.

Are intermediates getting the hand-me-down components and frames that were designed for racing and is that OK?  Do car manufacturers do that or do car companies design cars and car parts for the average driver?  I suspect that intermediate riders aren’t getting the best designs for us.

Try following the premium bike companies on Facebook.  Other than Yeti to some extent the posts are almost always about racing.  Someone needs to point out to bike companies that intermediates don’t give a shit about racing.  We have other value propositions for mountain biking that are important to us.  This blog will explore those and find bikes and components that fit our needs.  I’ll also post my videos and I have a bunch in production.

Mountain Biking Road Trips In The US West